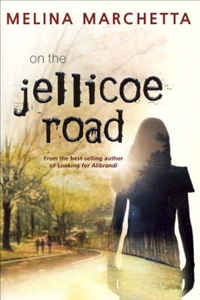 Taylor Markham is an angry and frustrated seventeen year old. Abandoned by her mother several years previously, with only a patchy recollection of her childhood, she only has her distant guardian, Hannah to unwillingly fill in the gaps. That is until Hannah disappears. Leader of the Boarders at The Jellicoe school, Taylor is caught up in the fractious turf wars between The Boarders, the visiting army Cadets and the resident Townies. When she comes face to face with the leader of the Cadets, Jonah Griggs, a fellow lost soul who betrayed her trust in the past, Taylor learns the hard way that she has to let people in if she wants to find out the truth about her past.

I have to just say, condensing that novel into one paragraph was one mammouth task.


First off, I must say this was my second attempt at reading this book. I think this is an important thing to mention, as I suspect many readers may not make it past the first few pages. The severe information overload is overwhelming, with not one, but THREE back stories to contend with and I confess that I didn't feel I had the concentration required to invest in this book and promptly shoved it back in the cupboard to be wrestled with at some point in the future.

But I must urge you, I repeat URGE you to persevere - this has been one of the most rewarding titles I've read in, well, ever. After reading some pretty rave reviews, and considering I'm attending a Young Adult Fiction masterclass next week, run by one Ms. Marchetta, then I figured I should really give it another whirl.

Oh, thank Christ I did. I left me in pieces. Pieces, I tell you! Buzzing and bereft, all rolled into one, absolutely distraught because finishing it meant I would never have the joy of discovering again.

It all hinges on how successful and believable the voice of Taylor is to the reader, and Marchetta nails its completely. I was with her all the way. She is a tough customer, but not without reason. Marchetta carefully peels back the revelations and, for the most part, it was impossible to second guess her.

The corresponding back story, involving a groups of friends in the 1980s, forming bonds in the aftermath of tragedy (yes, I know, more depressing stuff, but stick with it) is perfectly interwoven into the plot, littering hints and clues without giving away the mystery.

The author directly references 'To Kill a Mockingbird' in the text, and the flashback sequences have shades of the classic. From the childlike nicknames (Webb, Fitz, Narnie, Tate) to the dusty setting, I pictured them all in dungarees, chewing on grass, skimming pebbles across the water. A strong image, But I would have like greater sense of time and place in these paragraphs - it was easy to forget they are set in the eighties, and so I felt I lost some connection with these characters.

A minor quibble though. This was a bloody brilliant read. Like any great YA read, it left me with a hankering to relive those days, despite all the drama. Or maybe because of it.
Posted by Anna Scott at 12:40 1 comment: 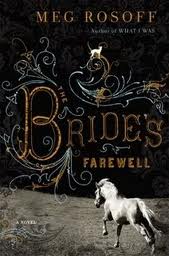 Ok, after reading two other Meg Rosoff titles recently, one thing I could predict before picking up this book, with absolute certainty, is that it would be completely, resolutely unpredictable.

Which I LOVE, by the way.

Our young heroine, Pell Ridley, escapes her family home on the eve of her wedding, taking only her horse and tag-along pseudo-sibling, Bean. Together, they head towards the unknown, where no-one, neither the characters, or the reader, have any clue, where they might be headed and what will occur along the way.

If this was a more conventional read, then maybe Pell would come a cropper in the big bad world, realise there's 'no place like home', and return to her well-suited and devoted fiancee.

But, being Meg Rosoff, I should know better than to underestimate the strength and individuality of her core character. Pell is essentially clueless, she has no idea what she wants, maybe a clearer notion of what she doesn't want. But her character develops when she reacts to the circumstances she finds herself and I became enthralled by her stubbornness and determination.

I was transported back to A-level English Literature, transfixed by 'Tess of the d'Urbervilles', and this book definitely has haunting Hardy-esque undertones - the English countryside becomes a character in it's own right, sweeping Pell along in all it's ethereal beauty. Is Pell as tragic a figure as Tess? Well, you'll have to read it for yourself.

And just with 'How I Live Now', Rosoff not only handles the romance, but again manages to squeeze your heart strings until they're at breaking point.

If I was looking for any negatives, I suppose it didn't immediately grab hold of me as was the case with 'What I Was' and 'How I Live Now'. But this is a different beast entirely, commanding more from you as a reader, but rewarding you with so much more in return.

Let's just say, I will be ordering every one of her books in a pristine hardcover a giving them pride of place on my shelf. EXQUISITE.

And, the Hardy comparison is a fair one, by the way.
Posted by Anna Scott at 03:02 No comments:

A Response to 'Darkness Too Visible': Why Darkness Doesn't Have to be Destructive Thing

On June 4th, 2011, children's book reviewer, Meghan Cox Gurdon penned an article in the Wall Street Journal, criticising the darker aspects in contemporary young adult fiction. The responses to this piece created a tweeting frenzy, with many defending the genre, citing the benefits that outweigh any perceived negative connotations.

Being as aspiring YA scribe, this is a subject very close to my heart so he's a little piece I've written about the article -

Earlier this month in the Wall Street Journal, Meghan Cox Gurdon derided the 'depravity' prevalent in young adult fiction, calling on parents to keep a watchful eye on what their impressionable offspring are reading.


Apparently, it is 'likely that books focusing on pathologies help normalize them and in the case of self-harm, may even spread their plausibility and likelihood to young people who might never have imagined such extreme measures.'


Mmm...Likely. That's a very vague word to be using in such an explosive context. She has no answer for the more logical argument for the benefits of young adult fiction - that it is a comfort to teens that experience trauma. That it can help them battle their own demons.


Cox Gurdon has a rather fanciful notion of teenagers - innocent children who need protecting, sheltering from such infectious acts. Shouldn't we be giving them a little more credit?


Most are intelligent and capable of making intelligent choices. She speaks for a generation without actually quoting any teenage opinion whatsoever.


But none of this matters. Because 'teenagers don't read young adult fiction at all.' Well, only three out of 18 private school students visiting a bookshop. One afternoon. Apparently.


Now there's a representative demographic sample. And if this is indeed the case, then that makes her whole argument irrelevant. At last! Something we can agree on.


Her recommendation for suitable teenage reading: Fahrenheit 451. A book about censorship. And I'm one hundred percent positive the irony of this choice will be completely lost on Ms. Cox Gurdon.

So, what do you think? Does she have a point? Do I have a point? Does my opinion even matter, being a non-teenage person and not exactly the target market for these books. Please comment...
Posted by Anna Scott at 05:25 No comments:

Tips and Tricks From a Freelance Writing Seminar

Offering my own tips on successful freelance writing would effectively be like the incredibly short-sighted leading the blind. So instead, I will offer up a few little gems I picked up whilst in attendance of an excellent Freelance Writing Seminar run by the Queensland Writers Centre.

Thanks to Tiana Templeman, Phil Brown and Amanda Horswill for an very informative evening.


Know Your Market
Your story ideas should match your chosen publication - borrow copies from the library to get a feel for the tone and the house style of the publication.
Know WHEN to pitch an idea - avoid busy production times when replying to emails from freelancers maybe at the bottom of an editor's list of things to do.

Develop Contacts
Attend events and seminars, especially in your chosen field of interest or expertise.
Give out business cards and samples of your work at seminars - follow these up with an email a couple of weeks after the event.
Develop an online presence - a website or blog is essential showcase of your work when pitching ideas.
Join writers associations and relevant trade associations.
ALWAYS be professional.

Pitching Ideas
Make sure you know the correct person to contact.
Use a catchy story title in your subject line when emailing - use block capitals for an eye-catching effect.
Include a short, brief biography as an introduction, providing a link to your website or blog for further information.
Never send more than 5 fifty-word pitches at a time.
Always be succinct - don't waffle.
Remember, the first few words are VITAL.

Excellent advice, I think you'll agree. I for one will attempt to put these into practice over the next few months.
Posted by Anna Scott at 13:08 No comments: